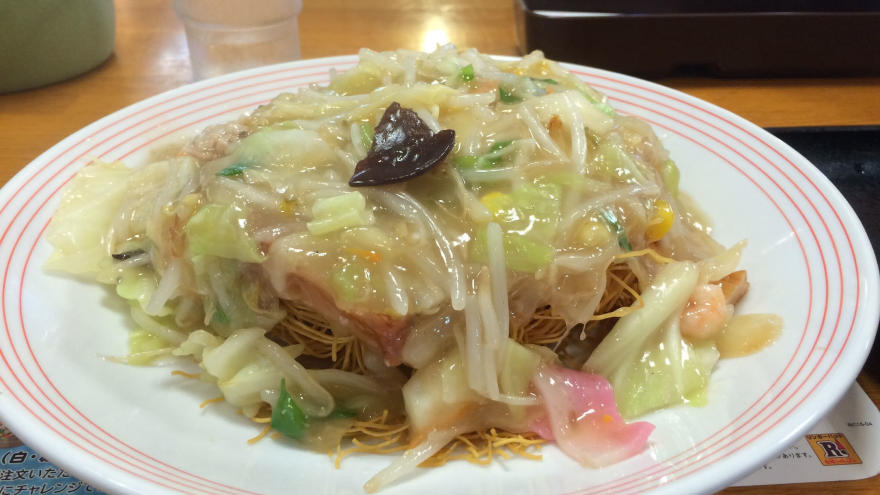 Welcome to the Ringer Hut! This restaurant is a kind of Chinese/Japanese fusion place. It features the China-inspired-but-Japan- perfected dishes of champon and saraudon. Champon is a noodle soup consisting of pork, seafood, and vegetables. Saraudon is a variant of udon noodles, but with a twist. For one, it's served on a plate instead of inside a bowl. As such, the "soup" is more like a thick sauce than an actual soup. The noodles can be hard and crunchy or thicker and resembling standard udon noodles. Also featured on the menu are gyoza (dumplings) and chahan (fried rice).

Born in the Nagasaki region, this restaurant is a chain that can be now be found all across Japan. Both champon and saraudon are widely regarded to be Nagasaki specialty foods. Even the name of the restaurant bears a strong link to Nagasaki. Ringer Hut is named for Frederick Ringer, a prominent British merchant who settled in Nagasaki. Ringer Hut can be easily identified in a mass of Japanese buildings by its distinct chapel-like appearance.

Despite the fact this is a chain, you can still get some really good quality food here! The main draws here are of course the champon and saraudon. These dishes are packed with vegetables and other goodness. The portions are also quite generous. In the event that a massing heaping pile of noodles and veggies aren't enough for you, you can order a "set" which includes some combination of white rice and gyoza. What's more, the price is incredible! Good quality food with generous portions at a downright reasonable price? Well pinch me, I'm dreamin'.